Making my way through the complete series of Star Trek: The Next Generation, one Tuesday at a time. This week covers Season 1, Episode 2: The Naked Now

The good? Data and Yar totally bang. The bad? Wesley. I fucking hate Wesley. This entire episode exists to set up Wesley as a character of any value. It is a lie – Wesley is useless. Verdict: 3/10.

Making my way through the complete series of Star Trek: The Next Generation, one Tuesday at a time. This week covers Season 4, Episode 15 – First Contact

Single Sentence Synopsis: It is better to ask permission than to beg forgiveness.

Recap: Dr. Lilith Sternin (formerly Dr. Lilith Sternin-Crane) and Malcor III’s most curmudgeonly government official, an unsettling mashup of Henry Bemis and Trent Lott, fuck up everything and almost get Riker killed. Picard’s best efforts and long, meaningful looks aren’t enough to save the day, unfortunately; Federation/Malcor relations will be verboten for generations, until old prejudices die and a new generation is ready for significant change (boy, that doesn’t sound at all familiar.). Upside? Riker gets laid. Downside? We don’t see it. Verdict? 7/10. 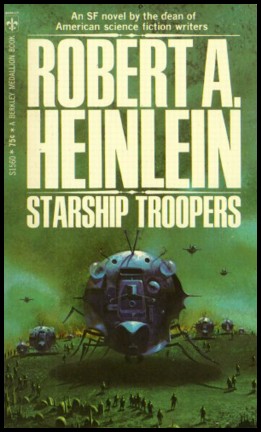 ‘Debra Messing Space Bugs’ is the first of many failed Google searches I’ve made while trying to remember the name of this damn book. I’ve spent the past month trying to finish reading it, but the title escapes me unless I’m staring right at the cover. I know they made it into a movie, and I know Debra Messing was in it. Not according to IMDB she wasn’t! Or was it Isla Fisher? Nope, not her either. It was Dina Meyer, as it turns out, and the book itself is Starship Troopers.

One of the best things about falling in love and moving in together is all the new books! My boyfriend’s tastes are very different from mine, but when I spotted his newly unpacked copy of Starship Troopers, I could not wait to read it. The movie is one big cheese-fest explosion covered in goo, and I loved it when I first saw it in theatres. It probably should not have come as a surprise that the book was nothing like that at all.

I wasn’t expecting hologram popups and hawt alien sex, but I was hoping for something to help move things along. For a book based in space, with rocket suits and dangerous missions, I just do not care. The book isn’t awful, just incredibly dull.  It reads like a long college lecture, with no excitement in the descriptions or the story itself. The main character, Rico, is entirely blank, with no discernible personality beyond Guy Who Observes Things. I like Zim, but that’s about it. Maybe all the flashbacks are what’s pulling me out of the groove, or the stilted way it plods along. Whatever the reason, I’m bored.

I refuse to believe that Robert A. Heinlein, with all his influence and accolades, just isn’t for me. Possibly it’s the genre, but that doesn’t sit well with me, either. Sci Fi is never my first choice, but I’ve read enough to know that it interests me, generally. I’m more than halfway through, and out of respect for the author, I absolutely intend to finish it. Hell, I’d even like to give another one of his books a shot. But considering I’ve finished two other novels while also working through this one, probably not any time soon.